Books on GIF is a weekly review and discussion of random books told with the help of GIFs. We'll cover fiction, nonfiction and the occasional graphic novel. 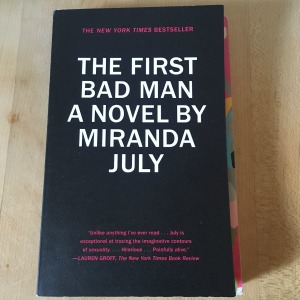 I picked this book up on that Strand binge I mentioned last week. It's a weird and complicated novel, and I struggled with figuring out how to write about it. There's a lot going on within its pages about the relationships between men and women, women and women, and women and babies. Some of what follows might not make sense until you read the book, which you should, but just go with me.

'The First Bad Man' tells the story of Cheryl Glickman, an uptight 40-something woman who lives alone, works as an office manager for a company that sells self-defense/workout tapes or something and has a life that to her feels very ordered and reasonable, but to an outside observer looks sad, desperate and ridiculous. For some reason I kept thinking of when Sean Young thought it was a good idea to go on Joan Rivers' show and campaign for the role of Catwoman dressed like this:

She wanted to be Catwoman so bad that she was willing to humiliate herself in front of a national TV audience. Cheryl does this on a much smaller scale. Her life is empty. She has no real friends. She pines for an older man/work colleague and begins to profess her feelings for him only to find out he wants her approval for an affair he's having with a 16-year-old girl. She also has conversations in her head with babies that remind her of an infant she encountered when she was a child, named Kubelko Bondy, whom she never saw again. And she has some kind of strange lump in her throat and seeks out bizarre treatment for it. Then one day the owners of her company announce that their 20-something daughter, Clee, needs a place to crash. Clee is a blonde bombshell whose description reminded me of Jessica Simpson in 'The Dukes of Hazzard' —

— except with smelly feet, bad hygiene and poor eating habits. Clee ensconces herself on Cheryl's couch and spends weeks doing nothing but watching TV. They eventually have a confrontation, and it turns violent. After that, their relationship becomes something like 'Fight Club' meets 'The Return of the Pink Panther,' as Clee lays in wait each day to attack Cheryl like Cato in Clouseau's fridge:

Grappling with Clee, both physically and metaphorically, Cheryl finds that the lump in her throat is gone and that she can cry, like Ed Norton's character at one of his cancer meetings.

But this is not the woman version of 'Fight Club.' Yes, violence initially is Cheryl's release from her hum-drum life, but her focus moves from the physical to the maternal to the sexual and then back to the maternal, but I won't explain further because it's too complicated, there isn't enough space here and I don't want to spoil it.  Suffice to say Cheryl grows as a person and discovers she is not alone and that she is capable of loving and receiving love, though not the kind she expected:

I'm a sucker for weird stories like this, but this one I thought was really great. It was strange, yet adhered to an internal logic that made sense. It was predictable, yet had genuine surprises. And it was hopeful, despite a lot of sadness and despair. The point of it all seemed to me that you never know what life is going to send your way — that your life now might be completely different in the next three months and again three months after that — so you need to be open and ready, as ready as you can be, to roll with the punches and come out of it stronger.

Though I'm not sure the book was profound, I did feel connected to Cheryl and was concerned for her well being. The book was really interesting and clever like watching a Michel Gondry or Charlie Kaufman movie where you're not quite sure what you just saw, but it moved you nonetheless.

What's next? In the coming weeks I'll review 'The Blind Assassin,' by Margaret Atwood, 'The Culture of Narcissism' by Christopher Lasch, and 'A Little Life,' by Hanya Yanagihara, among others.

You can find an archive of these reviews here. You can also find Books on GIF on Facebook, Tumblr and Twitter. Send thoughts, recommendations and feedback to booksongif@gmail.com.

* Thanks especially to Donna for copy editing this review!

We sent an email to with a link to finish logging in.