Books on GIF is a weekly review and discussion of random books told with the help of GIFs. We'll cover fiction, nonfiction and the occasional graphic novel.

This Sunday's book is 'Men Explain Things to Me' by Rebecca Solnit. 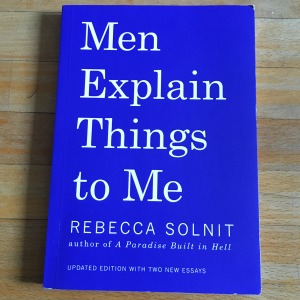 This book was recommended to me by Danielle, and I picked it up on a book-buying binge at the Strand after I attended a panel discussion called 'Gender in Book Criticism' (recommended by Donna). It's a collection of Solnit's essays and academic articles, the best of which lends its title to the book. The essay 'Men Explain Things to Me' calls out an all-too-familiar habit of men:

Solnit is at a party in Aspen where she's talking to 'Mr. Very Important' about someone (I've never heard of) about whom she had just written a book. Mr. Very Important then says that certainly Solnit must have heard of this other new book about that person that had just come out and was very important because he'd read about in the Times Book Review or somewhere that was so important that it was just blah, blah, blah. Turns out, the book he was citing to belittle Solnit's work was Solnit's own book, he just didn't realize it. And once that was pointed out to him, he just kept blathering away like:

— but also because when men are called out on it they tend to deny the problem exists by ignoring it or firing back some version of:

Which is the same way of saying 'not me.' Sure, not all men. Sure, a woman can mansplain to another woman. I've seen it happen. Who cares? As Solnit points out, and everyone knows, this is a common behavior among men that's a (sometimes subconscious) form of misogyny. I've seen them do it. Hell, I've done it. Yes, me.

Solnit bends over backwards to point out that there are good men out there, more than I thought was necessary. But men, even the helpful ones, need to listen more (remember how important that is?) on this and other issues affecting women, and Solnit's book is a good place to start.

The rest of the collection didn't feel to me as universal as the opening essay. The Dominique Strauss-Kahn case and #YesAllWomen seem like ages ago, but it's not Solnit's fault if our politics hasn't progressed since the book came out in 2014. But there were some gems, including a meditation on a painting of a woman hanging laundry in high heels (why is she doing that?) and a great section on Virginia Woolf's emphasis on wandering as a source of creative inspiration. (It's something that I do to clear my head, and I've often counseled reporters struggling with stories to do the same.)

And then there's the statistics she cites. In 2013's 'The Longest War,' Solnit writes there's a reported rape every 6.2 minutes in the United States. In 'Cassandra Among the Creeps,' she cites Department of Justice data from 2000 that estimated there were 322,230 rapes that year resulting in 55,424 police reports. Of those, 26,271 resulted in an arrest, with 7,007 convictions. So 2 percent of total rapes and 12 percent of those reported to police ended in a conviction. That's incredible. It makes you want to take action.

But what action? This came up at the 'Gender in Book Criticism' panel during a discussion about why men still dominate the book world, both as reviewers and as those whose books get reviewed most. The takeaway was that if we really want change, we have to make it. We have to seek out and support female authors the way we do male authors. And if the power structures of the book world won't move fast enough to be more diverse and inclusive, then we have to create new imprints or review publications that will. The only thing to it, really, is to do it. So when women speak up either through #YesAllWomen or following Kelly Oxford's tweet, men need to listen. And then change. Let's start by not doing stuff like this:

The panelists discussed the annual VIDA count, which tabulates male and female bylines in book review publications and how many books by women and men were reviewed. In 2015, the New York Times Book Review had 469 male book reviewers compared to 475 female. But they reviewed 589 books by men, compared to 396 by women. Other publications, like the New York Review of Books, were way worse. After the panel, I did my own VIDA count: Of the 22 reviews I had done to that point, 10 were of books by women. And since then, I've done three more books by men before this one. The score now stands 15-11. Not great.

I promise to do better.

'Men Explain Things to Me' by Rebecca Solnit was published in 2014 by Haymarket Books. 159 pages.

What's next? In the coming weeks I'll review 'The First Bad Man,' by Miranda July, 'The Blind Assassin,' by Margaret Atwood, and 'The Culture of Narcissism' by Christopher Lasch, among others.

You can find an archive of these reviews here. You can also find Books on GIF on Facebook, Tumblr and Twitter. Send thoughts, recommendations and feedback to booksongif@gmail.com.

* Thanks especially to Donna for copy editing this review!

We sent an email to with a link to finish logging in.